These Claims are Too Accurate for Sand People

Once you have a good idea about whether the author or creator of a piece of information is reliable, the next step is to investigate the claims they're making. Is the information they're providing accurate?

Don't be this guy. Be accurate.

But here we run into a problem: how do you evaluate whether the claims are good, when you’re not an expert in the subject yourself?

Easy: find experts. And not just one. In this glorious internet age, you can summon many experts in mere moments. Use your Google-fu to assemble other sites and authors talking about the same subject. Then use your credentials evaluating skills (see the previous section!) to dismiss the self-claimed “experts” who don’t have real expertise in the subject. Finally, put the remaining, true experts into conversation with each other. Look for a consensus, if one exists, and seek to understand the reason behind that consensus. 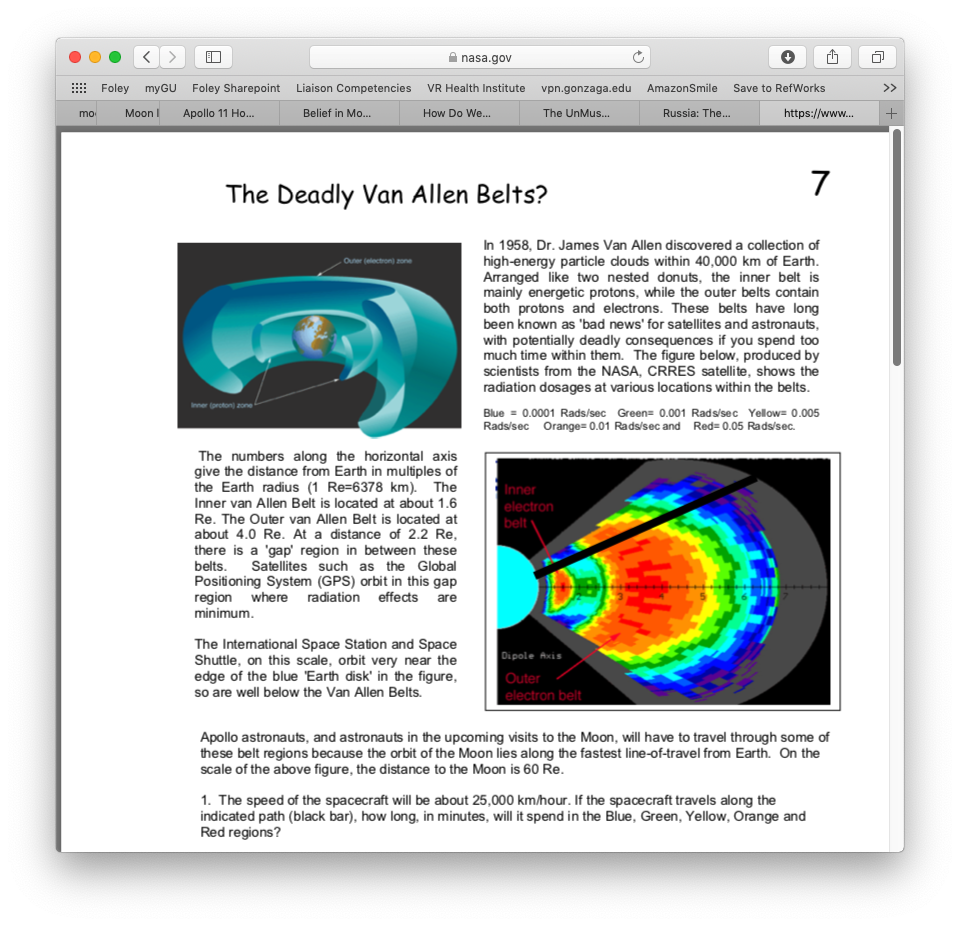 When you’re researching a subject, your browser should look something like this: many tabs, with many authors, and you, the researcher, going back and forth checking credentials and claims.

Pay attention also to your own knowledge! If something feels wrong or impossible, ask yourself why you feel that way. For instance, if someone claims to have seen a UFO as a B-52 bomber crewman during World War II, but you know B-52s were invented later than World War II, that’s a pretty big red flag, no matter how professional the website making the claim might seem. Or if you're researching genetic engineering and find yourself on the very professional website of Masrani Global, which talks about genetically creating dinosaurs, pay attention to the little voice that says, “Wouldn’t I have heard about this if it were true?” And then go look and see if anyone else is talking about it, and what they have to say.

But be careful of your preconceptions! Not everything you know is true, and not everything "everyone knows" is true. As in, "Everyone knows Columbus was trying to prove the Earth was round." (Actually, everyone already knew it was.)

Sight in on What the Site Cites

Don't take someone's word that "research says" this or that — follow their research trail and verify it yourself! Credible researchers tell where they got their information. Is there a bibliography, citations, or links to back up each claim or argument? 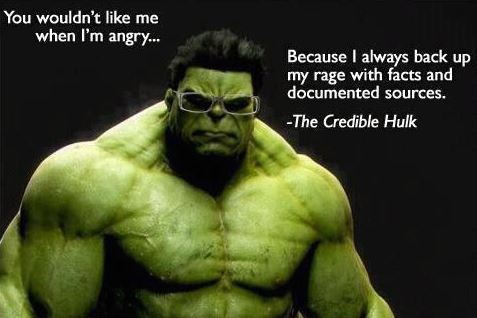 This, incidentally, is one reason why you cite your sources: to let others verify your research and evaluate your work. All that annoying, finicky work on your reference list has a purpose!

Having sources isn't the end of the investigation, though. Follow those links and ask: are those sources reliable? And do they truly support the claims being made? (Sometimes people put citations in to look scholarly, but the cited articles don't really support their argument.)

Sometimes, a claim in an article will not have a citation backing it up. If this is the case, ask yourself: is this information original research? If so, are the researchers qualified? Was the research peer reviewed?

Give Me All Your Currency

Make sure the information you are investigating is current and up-to-date. More recent information is usually better . . .  but not always.

For instance, newspapers and websites often contain instant, up-to-date information about a current event. This timeliness is appreciated in the moment. But it is often the later information in magazines, journal articles, or books that is able to bring together more sources to create a duller picture and broader understanding of what happened. 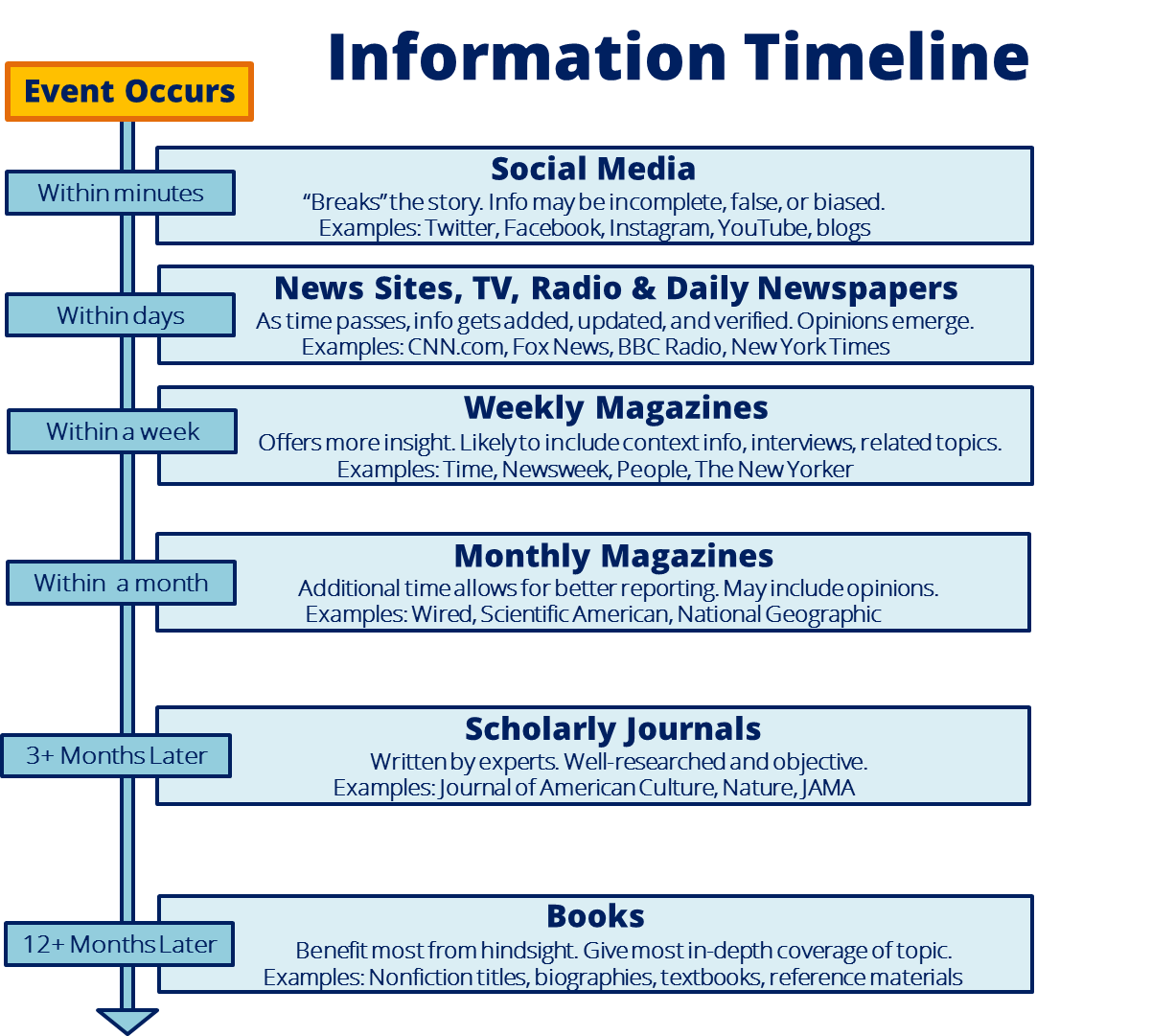 The importance of being up-to-date also varies depending on the academic discipline. Being current tends to be highly important in fields like science, math, medicine, engineering, or any other field that relies on experimentation for data. On the other hand, disciplines like history, philosophy, or religion don't necessarily require the very latest info, often because their primary data is old in the first place.

We know this intuitively. For example, a website from 2002 about technology trends is probably woefully out of date, but a website from the same year about the Civil War might be a great source. That's an easy example. When we're less familiar with the subject we're researching wemight have to think consciously about whether the topic requires the latest information or not, and whether our source is a good match.